The CIA runs the truth movement

Disinformation is a warfare tactic mainly used by governments. The purpose of disinformation is to discredit an enemy or political dissenters. It has been well documented that intelligence agencies in the past have been behind numerous successful disinformation operations.
Intelligence agencies keep a very close eye on all activities and movements. The heads of intelligence agencies know very well that they are there to protect the elite at all costs.
The elite foresaw the coming digital age and devised effective strategies to counter all threats to them in this coming information age. They know the future, because they create it. With the advent of the internet and the free flow of information they realized the danger of getting exposed by individuals who would for sure form a truth movement that would certainly unmask them. They devised the strategy to counter this danger by spreading disinformation. They set up individuals and groups in advance to lead the (fake) truth movement. Giving the public leaders themselves, who in reality are misleaders.
One of the main goals of intelligence agencies like the CIA and MI6 became to discredit the alternative news and information that exposes the existence of this ruling elite and their plans.

Disinformation is intentionally false or inaccurate information that is spread deliberately.
A common disinformation tactic is to mix some truth and facts with lies and misleading conclusions.

Disinformation is an act of deception.

All above five types of deception are used in the truth movement.

The method of operation : Mixing of facts with fiction

The primary goal of disinformation in our context is to discredit and misdirect.
They set up individuals and groups in advance to lead the (fake) truth movement. These individual are very well funded and are helped to get a large audience. That’s why many of them also get mainstream media coverage. If someone is telling the complete truth then he will never be on mainstream media. (like David Icke does). 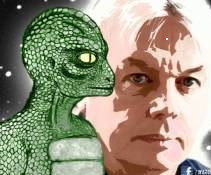 Discrediting the alternative media is an essential task that these disinfo agents have to accomplish. These disinfo agents help to do so by flooding the internet with nonsensical stuff like aliens , reptiles and so on. Mixing it with legitimate and genuine information regarding the Illuminati and the New World Order. They mix facts with fiction. They write and speak about the federal reserve, plans for a global government, false flag operations, corporate media deception etc but then they talk about aliens, reptilians, new age mumbo jumbo and other ludicrous stuff. When the moment people hear them talk about aliens, reptile shape shifters or that moon is an alien spaceship they immediately stop listening to them any further. People lose all their curiosity and interest. Many people then consider everything they have spoken on as also some kind of meaningless rubbish. This way they successfully turn people away from believing in the true parts of their speech like the federal reserve being a private central bank or global governance agenda.
All the sensible information is also not believed along with the absurd theories they perpetuate.
This is how information is perpetuated and the message people get. –

This is how everything is mixed up and presented together. Think tanks, treaties, aliens, false flags, reptiles, new age doctrines, politics, economy all mixed together.

This is the perfect method to discredit and stop people from believing in the true parts.
These disinfo agents have turned the truth movement into some kind of a circus.

Another goal that is accomplished by these disinfo agents is that they misdirect the people who still believe in them. These fake truthers make a fool of their followers and after telling some truth they spin them off into a wrong direction.  Their followers are left reading and discussing aliens, reptilians, new age doctrines, free energy pseudosciences or some other distraction.
We are going to fight and defeat these dynastic elite families by exposing who they are, what they believe in, how their system works and where they are taking us, only then something can be expected to change. Talking about aliens or reptiles or new age teachings is not the solution. We should discuss serious topics like Bilderberg group, CFR, Trilateral commission, BIS, IMF, global governance, central banking, free trade, privatization, police state, Orwellian smart cities, geoengineering , microchipping, Agenda 21,  transhumanism, fake wars, poisonous GMO food, Biometric ID cards etc.
Talking about aliens, reptilians, nibiru, chakras, free energy pseudosciences is not going to change anything. The only result of mixing it all up and presenting it in this way is that others won’t take you seriously and everything you say will be considered as a joke.

Another major thing disinfo agents do is that they create massive confusion.
They keep their followers in a state of confusion. Their followers lack a good understanding and nothing is clear to them.  There is no manifesto, no  coherent information, no context,  no outline, no framework, just lots of random, disconnected and unrelated data. They mix all kinds of disconnected, unrelated information together and talk on hundreds of different topics in order to create confusion.

Once their shills have hijacked the truth movement then it doesn’t matter even if someone is telling the complete truth because the truth is lost in the web of disinformation. Disinfo agents outnumber true researchers and their work is ignored. They are also not taken seriously by the general public. People assume they also must be believing in wacky alien theories. True researchers lose reliability and credibility just because people associate them with these disinfo agents and not because they are wrong or making errors but because these fakes use many same terms and speak on topics they do, people then also associate them with these disinfo agents and consider them just like one of these disinfo lunatics.
Now we have these buzz words and slang like “conspiracy theorists”, “tin foil hat”, that’s a famous label now, anyone holding an alternative viewpoint is now called as a tin foil hat guy.

Once the truth movement has been hijacked by these disinfo agents and implants and they have successfully built this ridiculous image of the alternative media and turned the movement into some kind of circus then what intelligence agencies do is that they set their agents who act as debunkers. So they create both the disinformation agents and the debunker agents. They also set up  individual  who act as skeptics, rationalists, conspiracy psychologists and write lengthy material debunking the conspiracies across the internet. The debunkers run skepticism and rationalism websites and they try to debunk the endless conspiracy theories. With the fictional theories they also attack the real ones applying fallacious reasoning and twisted logic. People fall for the lies of these pseudo skeptics just because of the outlandish theories perpetuated by the fake truthers. The only reason people reject the legitimate information is because of these bogus and absurd theories that are mixed with them.

Some famous disinfo agents and sources are

Jones during his joker episode

Don’t get me wrong these people speak a lot of truth but then mix it with fiction. Some argue that these guys have done a lot to awaken many people but the reality is that they have turned away way more people than they have awakened. They have done more harm than good. People after listening to them reject the alternative sources and consider them as part of the internet conspiracy culture.
Exposing the disinfo agents and disinformation sources is as important as exposing the elite.

7 thoughts on “Disinformation and the truth movement”

This site uses Akismet to reduce spam. Learn how your comment data is processed.